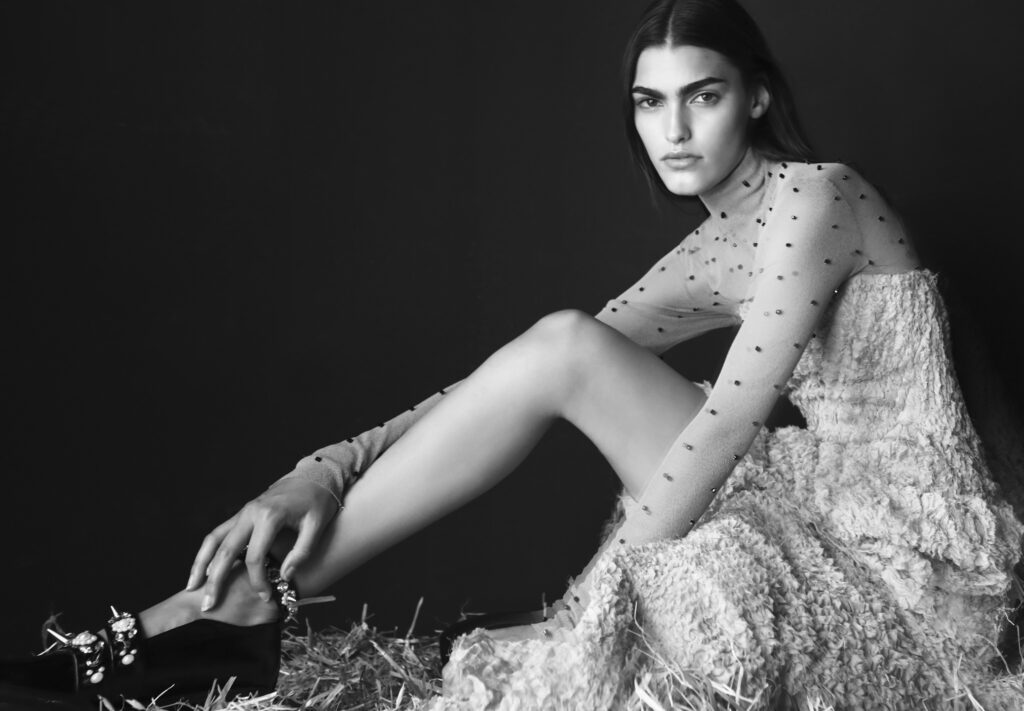 In the A-W 2021-22 collection, Judy Zhang takes inspiration from Anna May Wongs style and elegance, the first sino-American cinema star and the first Asian- American who became an international celebrity. Between the Twenties and the Thirties, she became a style icon thanks to the way she dressed and talked and especially to her behavior that defied the convention of that time.

In every collection, the designer Judy starts from a fil rouge that fully embodies the combination of Western and Eastern culture that she perfectly knows how to mix. The elegance of the shapes and the style of the collection recall the inspirational character that encloses the first two worlds America and China. Her beloved Italy is shown on the textile printing that represents the Presena Glacier, which is gradually turning pink because of seaweed. The suggestive images of the glacier enchant the view but the presence of seaweed flowers its very bad news for its health because dark snow absorbs more sunlight. It means a faster melting of the glacier.

The visual graphic of the collection is exactly this chromatic stain dyed of pink, green, light blue, and a touch of red, and it is chosen for the suites of the female silhouettes for the waist of the blazers combined with the mens cut trousers and super-tight turtlenecks.

The luxurious fabrics, shaped with mastery to create coats, dresses, blazers, trousers, shirts, and skirts with tailored cuts and details, characterize the selections that offer silk, wool, cashmere, velvet, and special Japanese fabric. The fuchsia mohair has been chosen for the warm coat with its unmistakable pointed collar and belt at the waist. The light blue and green lather is the chosen fabric for the tank top to wear with the shirts with important sleeves and its skirt with a deep slit. Every item is a hymn to Chinese haute couture that the designer proudly wants to bring all around the world.

The color palette that colors Judys creations is the inevitable black and white, lit by the thousands of shades of blue and green, in addition to camel and pink. Embroidery is made with beads and they remind the flowers of orchids to embellish denim skirts and pants.

The important structure of the jackets and shirts shoulders made with a particular technique, the tight suits and the miniskirt with beads, tell about Judy Zhangs woman nature which is distinguished by courage, independence, and refined sensuality, always ready to fight for the things in which she believes even against any convention.