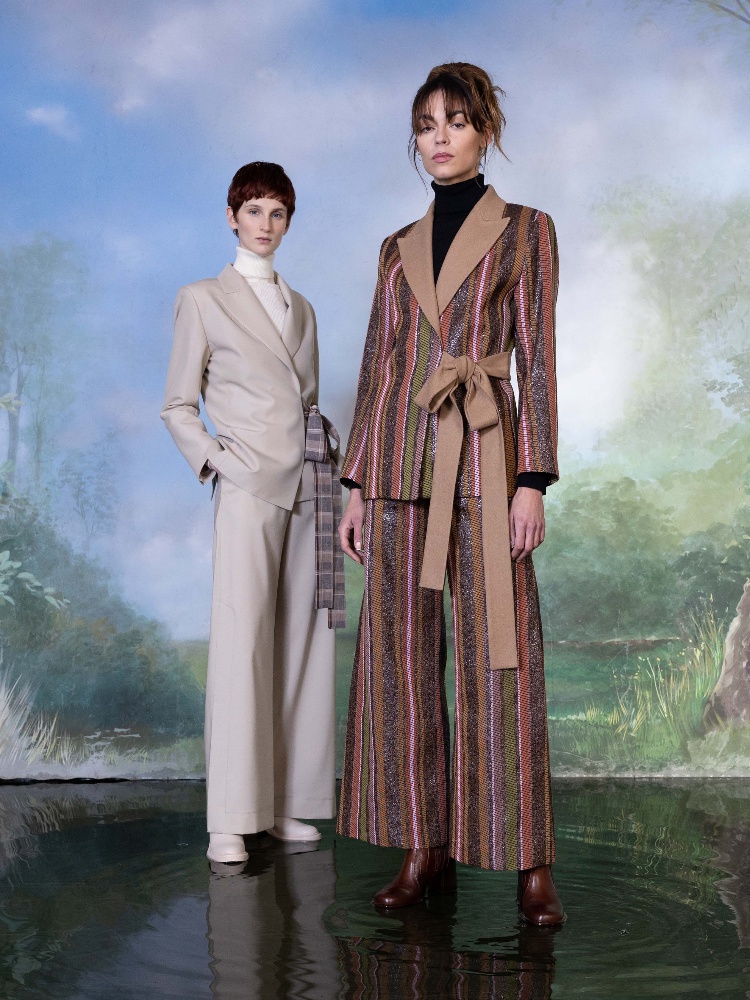 Following graduation from Central Saint Martins (where he won the LVMH Grand Prix Scholarship), Benjamin Benmoyal, 31, worked for Alexander McQueen and Hermes before launching his own label in 2020. Since 2021, the brand has been presenting its collections at the official Paris Fashion Week calendar, as well as on the FHCM's showroom: Sphre. Being a former commando paratrooper, he wanted to keep the sense of naivete he lost while serving in the military alive in his work. Because of this, he has created very unique fabrics, woven out of his childhood VHS and audio cassette tapes. Through the work of recycling charities and collecting dead stock from factories closed in the 2000s, he has industrialized this weaving technique and accumulated thousands of kilometers of cassette tapes. Benjamin's designs are inspired by his Moroccan roots, focusing on the volumes and drapes of traditional outfits, and weaving striped fabrics reminiscent of Berber craft. The AW22 collection was inspired by Benjamin's graduate collection through brutalist architecture. Long coats with structured squared shoulders as well as tailored pieces are now mixed with caftans and his signature woven striped fabrics. The silhouette gets more sophisticated and elegant while keeping a relaxed attitude.

In order to get deeper into sustainability, the brand completely stopped using plastic of any kind. For example, the buttons are now made from casein (a protein element naturally occurring in milk) or also made out of scallop shells.

This year, Benjamin has been collaborating with the luxury crystal company Baccarat on the creation of special pieces and other collaborations with major fashion houses are in progress and will be revealed during 2022.